My Entrepreneurial Spirit Pays Off 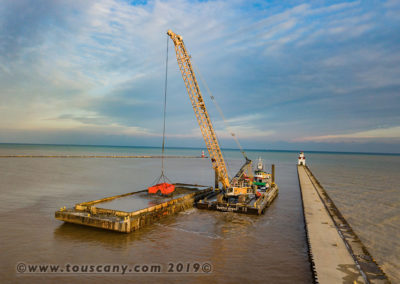 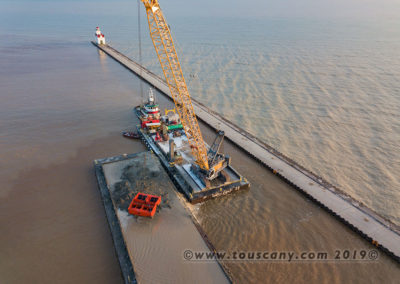 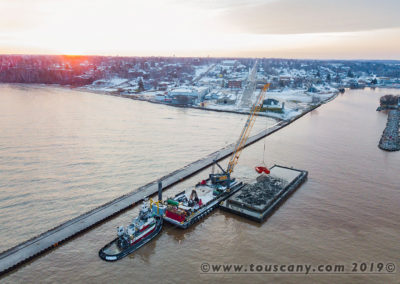 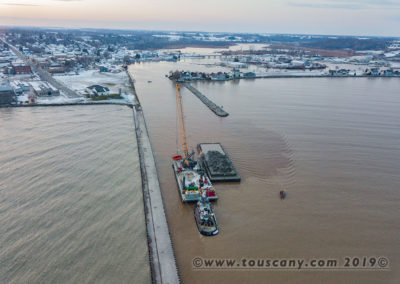 I made an unusual sale recently as a result of having an entrepreneurial mindset and taking some initiative.

I was completing some web design business in a city on the western shore of Lake Michigan.  Once I finished, I drove down to the lakeshore to fly my drone for fun and maybe come away with some nice photographs of the Lake Michigan shore.

When I arrived at the lakeshore, I observed dredging taking place.  A large crane positioned on a large barge was dredging the channel from the harbor out to Lake Michigan.  It was removing silt, dirt, and debris from the bottom of the channel and dropping it into another large barge positioned next to it.  A tug boat was also positioned to keep the crane’s barge in place alongside the pier.

I flew my drone around and about the dredging action taking place and created both photographs and video.  The weather was overcast which provided me with nice even lighting for all angles to create visuals.

On my way home, it occurred to me that the company responsible for the dredging might be interested in seeing and purchasing the most recent activity I had captured.  However, I had to learn the name of the company doing the dredging.

Once I got my images uploaded into my computer, I found names on the barges and the tugboat.  I began researching these watercraft and found the name of the company that owned the tug.  As I guessed, it was a company located on the opposite side of Lake Michigan that was doing the dredging work on this side of the lake.  I found their website and a phone number.  I called and got the name of the guy that would be interested in seeing what I had captured that afternoon.

On my website, (built on a WordPress platform with the Divi theme builder, by Elegant Themes), I created a page and posted the images, each with a watermark.  I posted video too.  My only problem with the video was this.  There was a feature allowing any user to download the video without paying for it.  After some research, I found some CSS code I could embed in my website that removed that download feature from the video display.  Now I had a safe way to show the imagery I captured without fear of it being taken without payment.

Now I had a name, an email address, and a way to show my product.

On the Wednesday morning before Thanksgiving, I wrote an email to my guy at the dredging company that included a link to the page I set up with images and video.  If I was to hear anything, I figured it wouldn’t be until after the long Thanksgiving weekend.  I was wrong.

After a few calls and emails back and forth, I sold him 11 images and six video clips.  Once I was paid, I sent him the images.

In my communications to my ‘bucket guy’, I had said that if I had known we were going to be doing business, I would have flown my drone closer to the action.

So, I contacted him again as dredging in that Lake Michigan harbor was still taking place using his clamshell bucket.  I said this time I’ll fly my drone closer to the action.  As well as go out on the pier and create digital still images with my traditional digital SLR using a telephoto lens to get close to the action.  We negotiated a price and I was back on the lakeshore that day flying my drone and shooting more photos.  Video too.

My next goal is to become his new ‘Web Guy’ as his website is in need of a facelift.  Since I already have great photography and video of his products in use, I mocked up a home page using my photography & video.   As I hoped, when he responded to my last email, he inquired about an updated website. I quickly responded with a link to the mockup with some pricing.

All this work had come my way because I had taken the initiative to find a market for the images and video I had created while I was just going to fly my drone for fun.